A small team from OBKA gave a presentation on beekeeping, honey, and wax to families with young children at the Science Oxford Wood Centre for Innovation in Oxford. The centre provides education in science and ecology to primary school children during the week and runs family sessions at weekends.
I would like to thank the seven OBKA members who supported me at this event, Yvonne Parks, Martyn Butt (who lent his homemade observation hive), Mark Gwilt, Dawn and Alan French, Gulen Acikgoz, and Mark Sandham . I would also like to thank my wife Mary for helping to organise the candle making.

We did a short beekeeping demonstration for three separate groups of families, collecting honey from the hive at the centre, and then gave each family group samples of comb honey and honey in jars to take away. The children enjoyed tasting the honey. We also helped the children make candles, showed them an observation hive, and responded to numerous questions.

The weather was kind to us and we had really good engagements with over 150 people who attended the family day.

Many thanks to everyone who helped.
Richard Stansfield
OBKA Secretary

OBKA has been invited to the Blenheim Flower show for a number of years (see previous years’ Out and Abouts) and it’s a key event on our ‘show’ calendar.

As the event is over 3 days with quite a few rules about access to the site for setting up, stripping out etc. it takes a lot of planning – all done this year by Peter Hawkins and Eric Perkins (here in full ‘don’t mess with a beekeeper’ pose)

The aim of the OBKA stand at the show is to help us achieve our charitable aim of ‘..to further and promote the craft of beekeeping and to advance the education of the public in the importance of bees in the environment’. We have information boards with bee facts and figures but of course the main draw, for children and adults alike, are the observation hives.

In addition to the information boards and the observation hives we have a ‘flying bee’ demonstration facility and the ‘training’ hive with brood, super and the picture frames.

And we had some honey for sale…..

All of which generates a real, ahem, buzz around the OBKA stand

At the end of the show it all has to be taken down, packed up, moved back to the training apiary and stored in the bee shed.

The Association was asked if we could attend the 8th Lechlade Annual Vintage Rally & Country Show which ran over the May bank holiday weekend. OBKA attended on the Monday and after a quick set up with the new folding tables and display board were ready to go. The weather was a little overcast but dry and we had a steady flow of people coming over to not only have a look and chat but also trying and buying from a selection of honeys available.

Thanks to Martyn Butt and Liz Thomas for there help on the day, without whom we would have not been able to operate our stall. Thanks also to the event organisers for the opportunity to attend and their unexpected donation to the OBKA. 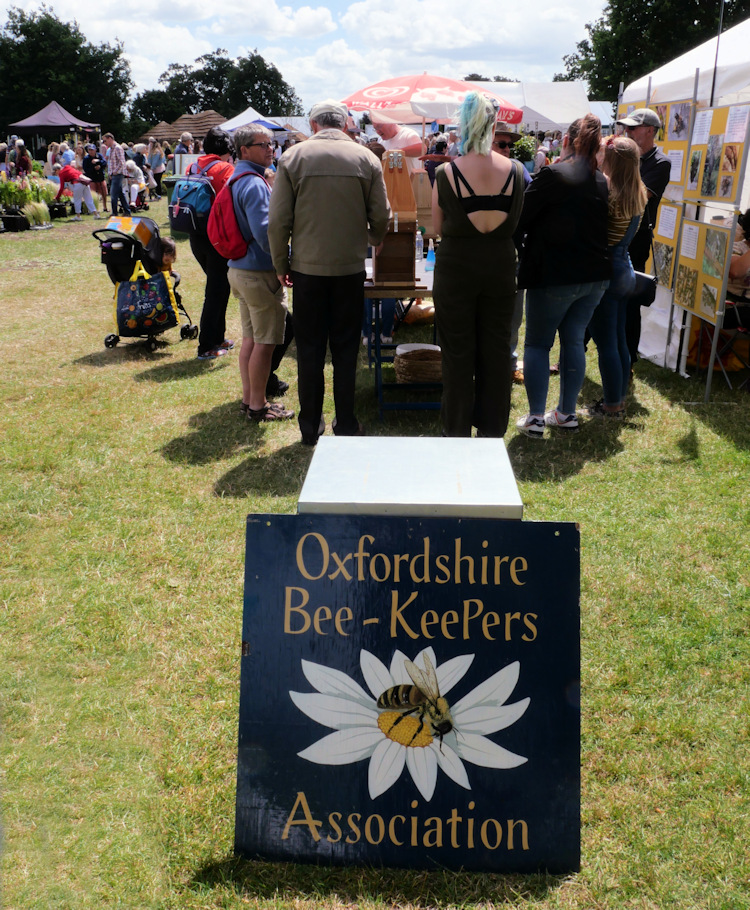